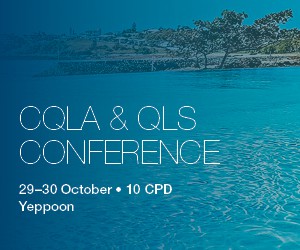 Notice is hereby given of the election to be held for the positions of President, Deputy President, Vice President and eight (8) ordinary members of the Council of the Queensland Law Society Incorporated. The terms for these positions will commence 1 January 2022 and will conclude 31 December 2023.

Candidates for election shall be nominated in accordance with the Legal Profession (Society) Rules 2007 (‘the Rules’).

The prescribed Nomination Form is available here and must be received by the Returning Officer at Law Society House, 179 Ann St, Brisbane, by no later than 4pm AEST Monday 13 September 2021.

Rule 31 of the Rules requires a nomination of a candidate for election to be in the prescribed form, signed by the candidate and seconded by three (3) practitioners, all of whom must be full members of the Queensland Law Society and on the Roll of Electors.

Candidates are requested to provide with their Nomination Form a brief statement to support their candidacy pursuant to Rule 31(3) of the Rules. The Nominee Profile Statement is available here. Subject to Rule 32 of the Rules, a member may be a candidate for one or more of the above positions.

If more than the required numbers of candidates are nominated for any position, members will be informed of the need to vote. The ballot will close 4pm AEST Wednesday 29 September 2021, votes will be tallied and thereafter the result of the election will be declared.

Prospective candidates are reminded that the Nomination Form duly completed and signed must be received by the Returning Officer at Law Society House, 179 Ann St, Brisbane, no later than 4pm AEST Monday 13 September 2021 via either:

Dated this sixth day of September 2021.