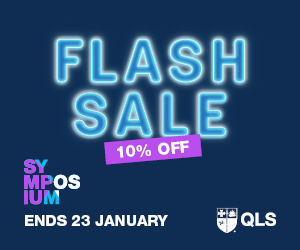 A damning report revealing Queensland has the largest backlog of criminal court cases in the nation was proof the justice system was heavily underfunded and in a state of crisis, according to the state’s peak legal body.

Queensland Law Society President Bill Potts on Thursday (Jan 24) said a Productivity Commission report revealing the state was the most clogged in Australia came as no surprise and was the "smoking gun" to support long-held views in the legal profession more funding was urgently needed.

"Queensland courts are so underfunded that the justice system is in a state of crisis," Mr Potts said.

"I don’t mean that in the derogatory sense. Our judicial officers are at the coal face of a justice system facing ever increasing caseloads caused as a result of the necessary and proper increase in police numbers and resourcing to help fight crime.

"Our magistrates and judges as a result are being required to work extraordinarily long hours, under increased stress and pressure to clear an almost insurmountable backlog of criminal cases with fewer resources – such as the courts registry and support staff."

Mr Potts’ comment follow reports Queensland’s magistrates courts has a backlog of more than 6200 criminal cases – which equates to 16 percent of the year’s crime caseload – that are more than a year old.

That is compared with just 1.9 percent in NSW and 10.2 percent in Victoria.

Mr Potts said Queensland ran far and away most efficient than the rest of Australia, but still remained severely underfunded.

The report found across all criminal courts, the State Government spent $835 to finalise each case, compared with $1164 in NSW and $1324 in Victoria.

"The Supreme and District Courts deliver judgments at a far cheaper rate per case than they do in any other state in Australia and they do so because they work extraordinarily hard and efficiently," he said.

"But the human mind and the human body can only be stretched so far and the much-needed resources QLS is calling for is an investment in what is social infrastructure. Our courts are the glue that holds society together. Whilst they may be criticised by many people who disagree with some decisions in some cases, the judiciary and the courts need to be supported, trusted and resourced properly."

Mr Potts said the current state government had been extremely generous in funding the courts, but needed to find more resources to ensure justice was "no longer delayed nor denied" in Queensland.

"Simply put, the courts need more funding and like Oliver Twist we are asking: "Please sir, please madam Premier Annastacia Palaszczuk, can we have more"."