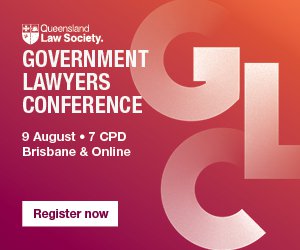 Meet Ashleigh Fanning, the second early career lawyer in a series of interviews for The Hub. Ashleigh was admitted on the papers in April 2020 thanks to Covid-19, but that hasn't stopped her from loving law.

We spoke to Ashleigh about switching from dancing to a career in law, moving to Cairns from South Africa, learning languages, and board games. Read the full interview below. 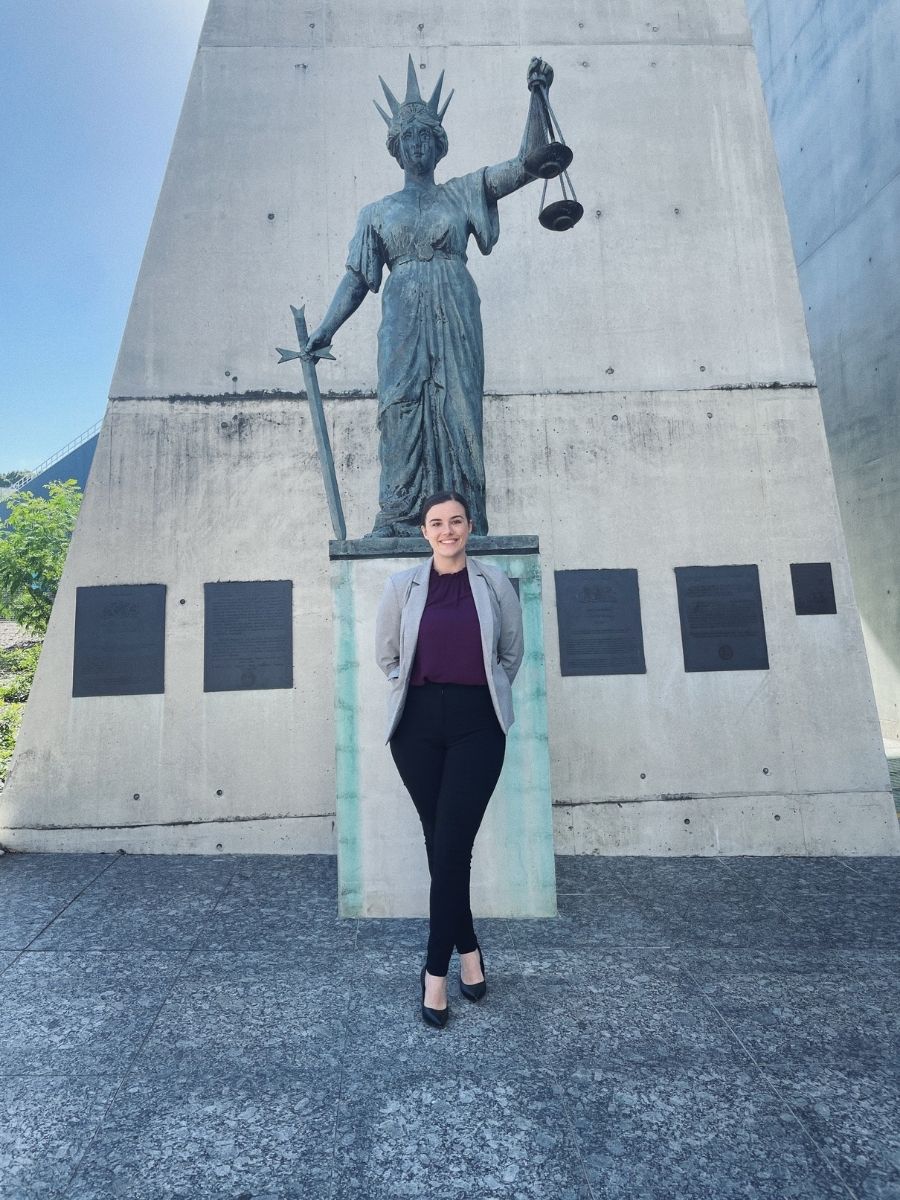 Ashleigh at the Supreme Court after a welcoming ceremony for practitioners who were admitted on the papers due to the COVID-19 pandemic.

Tell me a little bit about yourself

I’m a senior lawyer at Corney & Lind. I got promoted last week, which is awesome! I’m in our litigation team, so I practise mainly in employment, criminal, and things that stem off criminal, like domestic violence and child protection, and traffic matters. I was raised in South Africa until I was 16, we moved to Cairns, and then I finished my degree at Bond. And I’m an absolute huge board game nerd!

Did you find Cairns very different to South Africa?

Very different! I had quite a lot of quite bad culture shock at the start, and I didn't really like it in my first year, but I've really grown to love it.

Why did you decide to study law?

I never did! I used to be a competitive dancer, I was kind of quasi-professional for a while.

What kind of dance?

When I started doing more competitive stuff it was ballet, lyrical, contemporary, and urban/hip-hop, which was fun. All I wanted to do was move to LA and try and make it as a dancer, but my very South African father was like, “No, you’re going to go to uni first and if you still want to do it when you’re done with uni, then by all means go for it.”

So I thought about it and was like “Oh well, I used to do debate and public speaking in school and I was quite good at it, so I'll try law.” Anyway, I got accepted, and I remember sitting in my first class being like, “Man, I actually really love this, and I don't see myself doing anything else with my life.”

I knew since first year that I wanted to get into the areas of law that really deal with people, like criminal defence and things that deal with the complexities of human nature and human relationships.

So what's your experience working in law been like so far?

I got my first job in law in my second last year of uni, in 2018. I was clerking for a boutique criminal defence firm on the Gold Coast, and I really loved it. I got great exposure to file management, client management, learning how different solicitors work. I also got a lot of exposure appearing in court on mentions and things like that, client interviews in watch houses and experience in counsel. I then clerked for 18 months at my previous place of employment before I got admitted. I couldn't be more thankful for the start in law that I've had. I had really great mentors along the way.

Oh, it's huge! I'm the first person in my immediate family to go to uni, so I didn't have anybody that I could ask questions of. But then when I started clerking, the general legal community was just so willing to teach and mentor and be an active part of the foundation of any young practitioner’s journey. I couldn't be more thankful. They have been such an integral part in my journey in law.

Making friends with other people in the profession, no matter how senior they are, and then just being willing to ask them questions and being willing to receive feedback or receive the wisdom that they want to give you, is so invaluable. 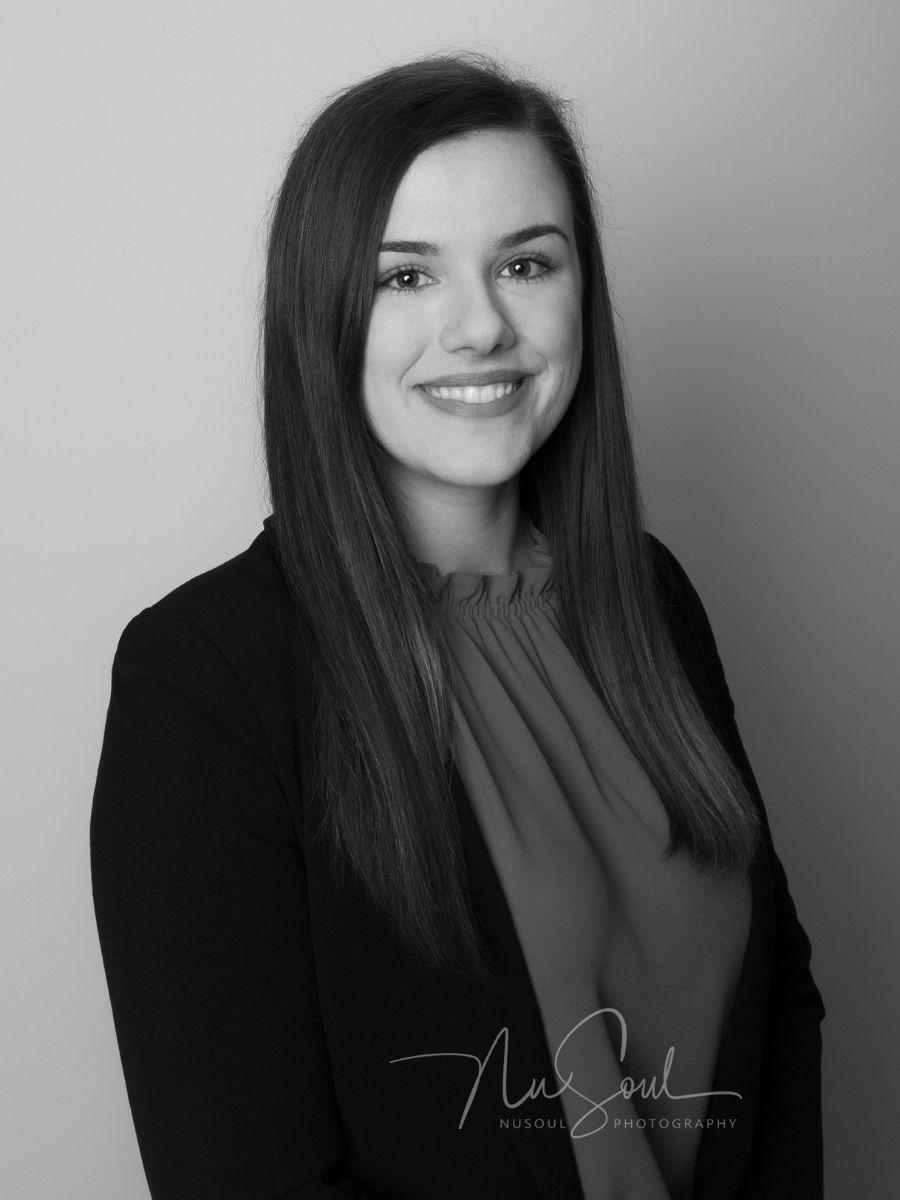 When did you get admitted?

I got admitted in April 2020. I think I was the first cohort that got admitted on the papers because of Covid. My heart was a bit broken that I didn't get my admission ceremony, but Her Honour, Chief Justice Catherine Holmes – the incredible woman and Justice that she is – she acknowledged that for my cohort, and invited all of us back to the Supreme Court the following year for an acknowledgement ceremony, which was really impactful for me. As much as it sucked when I got admitted on the papers, Her Honour really made such a profound impact and effort to make us feel a part of it anyway.

What would you like to accomplish later in your career?

I really enjoy being a solicitor. I enjoy the client contact involved in that, so I think that's where I see myself. Specialist Accreditation is something I've definitely considered. I want to start a family and I'd like to see what that balance is going to look like for me, having a family and continuing to practise.

What are you thinking for your Specialist Accreditation?

I'm thinking either workplace relations, like employment law, or criminal law. I'm leaning towards criminal purely because prior to working at Corney & Lind I was working in it for three years, so it's definitely where I feel most comfortable.

How do you feel about the legal profession so far?

I've noticed that it’s moving towards a more family-friendly environment for women who want both a family and a career, rather than making them choose. The profession has taken leaps and strides into making that more accessible to both women and men who want to have families. I'm really looking forward to there being a time in the future where choosing family over career is not even something that needs to be thought about, because it's so well ingrained in the profession. As you can tell, family is a huge value to me.

I feel like it’ll happen in your career span for sure.

I agree. I want to give honour where honour is due for the women who’ve worked so hard for my generation to benefit from what they've fought for. I'm really excited to see the fruit of that in 10-15 years from now.

Her Honour was saying that she was the only woman when she was first admitted, and that’s crazy to think about now.

Exactly. I was sitting in court the other day and it was really nice to see that, whilst there were male colleagues there, the bench, prosecution and defence (at the time I looked up), and the court clerk were all female. I was like “Wow, to think when Her Honour got admitted, that was not the norm!” It's really nice to see that starting to be the norm now.

And the new Chief Justice is also a woman!

Exactly! I was so excited to hear that.

I saw that you speak Afrikaans and Dutch and German and Spanish.

Well, I’m learning German and Spanish, and the Dutch is not fluent. I do consider Afrikaans my first language, but I was raised in a bilingual home and the majority of my schooling was in English.

Afrikaans is derivative of Dutch. I've got friends who are Dutch and we can have a conversation where I can understand them. I struggle to speak it back because I can't quite get the accent, but I can if I try really hard.

My mum’s heritage is German, so I’ve always been a little bit obsessed with learning German. I find it a little bit easier to learn than Dutch, because the wording isn’t so similar that I get stuck on whether it’s the Afrikaans or Dutch word!

I started learning Spanish in 2017 but I’ve been a bit more intentional about it since move to Corney & Lind, because we’re very multicultural. We have a lot of Spanish speaking staff and clientele. I want to be able to speak Spanish to a level where I can engage with clients and our community and my colleagues. We live in a very multicultural society in Australia so I think it’s always worth learning another language.

Catan, Ticket to Ride… My husband and I just got into 7 Wonders and we’re obsessed. Dice Game, it’s basically a strategy game where you’re constantly having to keep track of what everybody else said, and if you think somebody’s bluffing you call them out on it. There’s another one called Secret Hitler. It’s kind of like Mafia, but a little bit more complicated. That gets heated! And the last one would be Dutch Blitz, which is kind of like Speed.

Burgers! Burgers hands down. I love all burgers, but I think my one task in life is to source the best cheeseburger. My theory is, if your cheeseburger is good, then it is almost guaranteed that the rest of your burgers are good.

What’s your proudest moment or accomplishment so far?

When I got admitted. My parents have always been so supportive of education and wanted me to achieve things, but there was also kind of this underlying cultural aspect where if you just kind of coast and pass, that’s fine too, just do what very old-school 1950s housewives do. And if that’s your thing, great, I’ve got nothing against that, but I’m so thankful that I had parents that always continued to push me forward. To be the first person in my immediate family to go to uni and the first to be a lawyer was probably my proudest moment.

Who’s your role model if you have one?

I would definitely say my faith as a Christian plays a huge part in moulding who I am and continuing to progress me forward. I would also say my parents are two of my biggest role models. They are the most generous, hardworking, thoughtful, hilarious people you’ll ever meet. If I can be anything like them, I'm doing pretty good. They’re my best friends. They’re absolute menaces but they’re awesome.

Any general advice or parting words?

The importance of surrounding yourself with good quality people, not just in the law but also outside of the law, is vital to your health and your longevity in the in the profession, so don't overlook it. Your relationships inside and outside of the law is what's going to make or break you, so choose that well, choose it with wisdom and just make time for it.